You have most likely eaten, and perhaps even crave for, cheese with ‘a crunch’. Cheeses such as Goudas, Parmesan, and Cheddars have perceptible crystals, either inside their body or on their outside surface. This blog entry is all about these crystals: what, how and why.

First, what is a crystal? We see crystals every day, perhaps without thinking much about them. Sugar and salt are common household crystals.

Salt, for example, is made up of sodium and chloride ions, Na+Cl-. The physical form of the crystal consists of a regularly repeating geometric lattice of sodium (Na+) and chloride (Cl-), with their positive and negative charges forming an attraction, or electrostatic bond, which keeps the whole thing together in a solid form.

If they are big enough, we can see crystals with our naked eye, like sugar and salt, but we can also visualize the crystals at an atomic and molecular level, using high energy X-rays. When a focussed stream of X rays are aimed at a regularly repeating unit (like a crystal), the X-rays bounce through it in a specific way depending on the components of the crystal. The pattern in which the X rays leave the other side of the crystal can then be back-converted (using some very fancy mathematics) into the internal repeating structure of the crystal. This method is called X-ray diffraction, and a method using powdered crystal as the target is commonly used to examine cheese crystals (powder x-ray diffractometry or PXRD).

Cheese is an entire environment formed from a product from a living organism (milk from an animal) and is full of living organisms (microbes), therefore crystals in cheese are organic crystals, formed from microbial action on complex building blocks of cheese, and inorganic, formed from the various salts which become concentrated through the cheese.

All crystals ultimately form by the same physical mechanism. Components of the crystal (say Na+ and Cl-, or Ca2+ and lactate CH3CH(OH)CO2-) begin by being dissolved in water. Once the salt reaches a level of maximum saturation in the water — where no more can be held in solution — then solid crystals of salt spontaneously start to form or nucleate.

This is how cheese crystals form – components that are dissolved in the water content of the cheese hit that saturation level, e.g. by loss of water or acidity (pH) changes, and nucleate in situ.

Now you are armed with the basics about crystals, let's see how that applies to cheese.

Crunch on the Outside

One of the most common crystals that you might see on cheese is calcium lactate. Milk and cheese is rich in the sugar, lactose. Lactate is produced from the breakdown of lactose in cheese by microbes, such as the aptly named, lactococci and lactobacilli. Lactate is the negatively charged (-) form of lactic acid. The positively charged calcium (Ca2+) is naturally present in abundance in milk and cheese. On reaching saturation, Ca2+ forms an electrostatic, attractive bond with this lactate(-), forming crystals.

Calcium lactate is easy to see on the surface of aged cheeses, in particular block cheddars, where the method of packaging (wrinkly vacuum packed plastic) leaves enough oxygen and water present to encourage the lactic acid to concentrate there. Ultimately this allows the calcium to join with the lactate as it hits the saturation level, and form a long smear of small crystals (see images 2 & 3 below). Calcium lactate can also be seen in some other aged sheep cheeses, such as pecorino, where they appear as stellate dots inside the main body (see first image). 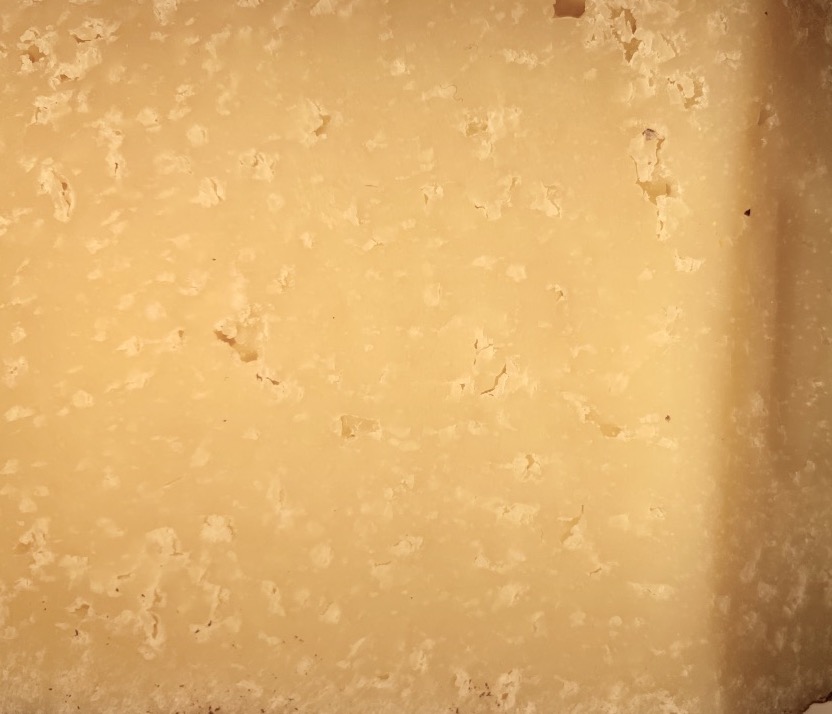 Due to their small individual size, these crystals don’t provide much crunchiness, and therefore are often mistaken for surface mould and are scraped off.

Crunch on the inside

Perhaps the most obvious, and desired, crystals found in cheese, are those found in aged Goudas, Parmigiano Reggiano, some Swiss-styles and some aged Cheddars. These crystals are within the cheese body, and can be found in ‘holes’ in the cheese (see picture) or as punctate clusters in the body. These organic crystals are remnants of the cheese’s solid protein structure (interested in learning more about the contents of cheese come to a cheese class!).

Cheese is made of a solid matrix of protein, which are themselves made of building blocks called amino acids. Crystals such as these are made of individual amino acids, mostly tyrosine and sometimes leucine. How they are deposited in cheese involves chemistry of the cheese and the biology of the microbes, and is fascinating.

The process of ageing to release flavours relies on the microbes present in the cheese and milk, breaking down the proteins and fats within the cheese. These breakdown products are one of the main drivers of flavor: the longer the ageing, the more breakdown, often the stronger the flavor.

The microbe Lactobacillus helveticus, is a favourite for many cheesemakers, as it is responsible for producing some sweet flavors – such as found in many aged goudas. L. helveticus is not able to synthesise all the amino acids (e.g. tyrosine, leucine) it needs for its own proteins – it has to scavenge them by actively breaking down proteins from other sources – such as cheese. And this is what happens.

In the image above, the white crystals in the large hole are formed by the work of L. helveticus and its cellular machinery on cheese proteins. This action produces significant amounts of tyrosine (and/or leucine). As the microbes live in the cheese, they also release carbon dioxide gas, which if the texture of the cheese is right, can expand to form a hole in the cheese.

At some point, the L. helveticus, die, but their protein breakdown machinery continues to function, and increases the amount of these amino acids present. These two amino acids happen to have a low solubility in water, and so even a small increase in the amount will result in reaching the saturation level, and crystals will start to form.

The hole and the crystals in the cheese are therefore echoes of the microbes which once lived and worked in that very spot.

Blue cheeses can have crystals inside them, which are also found within their 'holes' or caves. These holes, however, are slightly different to the holes found in swiss cheeses. Swiss cheese holes are formed by the gas released from microbes, which gives them a smooth surface. Blue cheese holes, are formed at the beginning of cheesemaking by pieces of curd, and so are really small areas which act like cheese rinds, and at the rinds, crystals can form through different methods...

There are some cheeses which have crystals within their rinds — although these tend to be hard to sense.

The rinds of both bloomy white rind cheeses, and washed rind cheeses are a rich, dynamic, active and diverse mix of microbes, forming a ‘living microbiome’ (read more about Microbiomes in another blog entry). This microbiome is in flux — the make-up of its microbial population changes over time as the rind develops. It has been shown that different microbes grow in a particular order, as the conditions at the rind change – a process called ‘microbial succession’. The conditions at the initial rind are created by the cheesemaker (for example salt washing), but then the subsequent activity of the waves of microbes changes the conditions on the rind as it ages. (This reinforces the idea that cheesemaking, and the cheesemaker can help set a cheese for a particular direction e.g. through moisture level and texture, but ultimately, it will be the microbes which define how and what the final cheese produced.)

On soft washed-rind cheeses, it has been shown that the acid and salt-tolerant yeasts are the first microbes to populate the rind. The yeasts metabolise lactic acid producing carbon dioxide and ammonia, and this begins to shift the acidity of the rind towards neutral (from pH 5.0 - 5.5 to pH 6.0 - 6.5 to pH 7). Once this level of acidity is reached bacteria are able to thrive, and as their populations grow the pH continues towards neutral, as they metabolize the lactic acid and produce substantial amounts of ammonia. In the holes of blue cheese, the fungus dominates the 'rind', and acts to drive the pH towards neutral mainly by its own activity.

This significant trend towards neutral pH at the rind results starts to affect the whole cheese. Firstly, the solubility of various ions in the rind, such as calcium (Ca2+) and phosphate (PO4-), decreases significantly, and this allows simple crystals to form, such as Brushite (small punctate crystals of calcium phosphate Ca2(PO4-)2) and Calcite (calcium carbonate, CaCO3) — these are pictured in the cave-like hole of the blue cheese above. Because of the loss of these ions into the solid crystal phase, other calcium, phosphate etc. ions begin to move down the ion gradient (via osmosis) from the centre of the cheese to the rind. This replenishes the ion supply, allowing further and greater crystal development.

The continuous metabolic production and osmotic influx of ammonia (NH4+), carbon dioxide (CO2/H2CO3), phosphate (PO4-) and other ions, at the rind allows more unusual and elaborate crystals to grow in complex with water molecules.

Recent work has observed two types of crystal outside of their ‘normal habitats’ growing within cheese rinds. Ikaite (CaCO3•6H2O), which is a highly unstable crystal that is rarely seen outside of freezing sea or lake environments, the cold being necessary in holding the crystal together. Another Struvite (NH4MgPO4•6H2O), which is often linked to bacterial activity, and found in warmer situations – in particular in urinary tract infections.

Even more curious, like the microbial succession, it was observed that these crystals existed in phases or waves. The Brushite being the first to appear, followed by Calcite, then Ikaite and finally Struvite – which seems to follow the level of complexity for each of these crystals, and may suggest the simpler crystals take less time to form than the more complex ones, and that the complex crystals use the simpler crystals as building material or nucleation sites.

So there you have it. Cheese crystals are a rich combination of physical chemistry, and microbiology, and I hope that now, when you eat a piece of cheese and hit that satisfying texture, you will pause for amount and be able to reflect on the wonders which brought you that fleeting moment of pleasure.

Trip to the Swiss Alps: Prologue

Cheese, the Microbiome and You.